Agnieszka needs to build products that really make a difference. She is not afraid to work closely with end-users. She loves to see how the product she builds influences somebody's life. She has been a part of Bright Inventions’ team since 2015 working on mobile apps, integrations with Substrate blockchain, and more. Check out Agnieszka’s story.

You are a fullstack developer. What is closer to you: frontend or backend?

I used to differentiate that but I don’t do that anymore. Now I look at a system as a whole. Problems that need to be solved are much closer to my heart. You will find them on the backend and frontend side as well. It’s the same with the technology you use. It shouldn’t be your number one focus. Solving the problem is more important than the tool you will use to do it.

If you are a good developer, it doesn’t matter what language or technology you use. If you learned well one language, you will incorporate that knowledge into another language. The idea behind coding is the key. Also, the goal you must achieve. And the language you will use to code the solution is a minor thing compared to those.

What have been your favorite projects so far?

I have always felt fulfilled when I could work closely with the client and end users. I enjoy the feeling that I built something which makes somebody’s work or life easier. Especially when I can see with my own eyes how it influences end users. That is very rewarding for me.

Why did you join Bright Inventions?

I actually knew Daniel and Michał (co-founders) from studies at the Gdańsk University of Technology. We were in the same college group, also with Piotr and Kasia. Eventually, all of us found our way to Bright Inventions. 😊

Yet before I joined Bright, I had had another work since college. I spent there a couple of years. I enjoyed that work but at some point, the pressure was really high. I was working closely with end-users. Even though I generally love that, after some years I felt I needed a change of scene. Maybe things could have been different if I had had a project manager in the team who would have supported us in the communication with end users.

In the meantime, Michał and Daniel started their company so I was thinking to join their firm. Back then they mostly specialized in mobile applications and I never worked with mobile. So I hesitated for some time but ultimately decided to join their firm.

I knew their approach from our college times. We shared the same values and strongly believed that good programmers are the ones who write good code and solve problems with it, no matter which technology they use. So I knew that Daniel and Michał wouldn’t have problems with me taking the time to learn mobile from the scratch.

Do you want to join Agnieszka?

I had a chance to learn a lot of new technologies here and I am grateful that Michał and Daniel always trusted me with new projects. Even if I had to learn some new stack for a new project they just let me do my thing. I guess I never let them down because I still work here. 😀

You are one of the Bright Inventions team members with the longest seniority. How was it to watch the company’s growth over those years?

When I joined Bright Inventions in 2015 only 8 people worked here. Now we have over 70 team members.

During that time I had two maternity leaves. When I left for the first time there were 8 people and only a couple more when I came back. But when I left to have my second baby the team was doubled, from 20 to 40 people. Obviously, in terms of organization, some things changed for good, especially after Ula joined the company. However, the essential things became the same. The things that really matter. 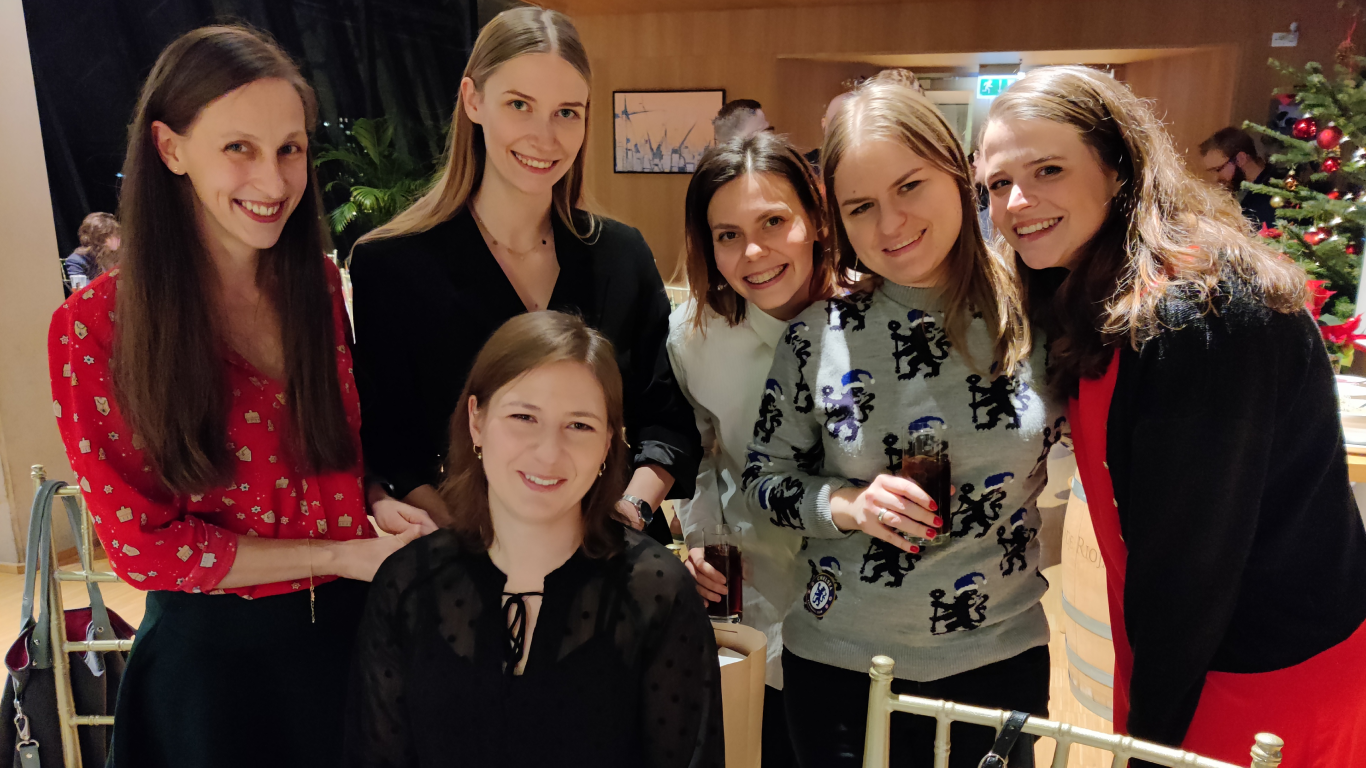 People still treat each other with respect and you can feel that they do work that really gives them satisfaction. Also, if I struggle with some technical or communication challenge, I always have somebody I can talk to about it and I know we will solve it. The company has to grow, but the fundaments remain the same.

So you changed your work only once? That is quite unusual for our generation, not to mention our industry.

Yes, I tend to become close to my workplace. I need to work at a place where I can really stick around. I need to feel that the work I do matters. Then I stay motivated. In order to feel that you also need to have a connection with your employer. When I have that bond I don’t want to move to another work and start that all over again.

Was it challenging to come back after maternity leaves?

For me, it wasn’t that difficult. Even after my second baby when I had to come back in the middle of the pandemic. Still, everything in the company was organized in a way that I didn’t feel like a stranger. I also didn't feel like I missed much in terms of technology. You know, I am a programmer for over a decade so what were those months away on maternity leave for me? It was like nothing.

I must say that coming back to my other passion (bouldering) was much more challenging. My body struggled much more to adjust after having babies. My brain was fine with it and ready to get back to work. 😀

What is the key to successful teamwork in software development?

Everyone has to understand that we have a common goal here. Our goal is to solve the existing problems for a client. If only some team member assumes that someone within a team has bad intentions or someone starts to complain about a project then it won’t work. If every team member realizes that all of us try our best at work, then a team has a chance to meet its common objectives.

You are one of our Substrate enthusiasts. Is blockchain something close to your heart?

Substrate is quite exciting because it has the potential to make blockchain more accessible. However in general I have mixed feelings about blockchain. It’s a young tech that gives many possibilities but unfortunately is often trivialized by identifying it with cryptocurrencies.

For example, Web3 ideas are worth spreading. Yet in order to make them a reality, Web3 needs to become global. And it is really difficult when the public eye focuses on a completely different side of blockchain. It’s just a shame that crypto is this global implementation of blockchain. Blockchain can do much more than crypto.

You worked on a team that built BrightTreasury – our original app for Polkadot and Kusama blockchains. How do you recall that?

When I returned from my second maternity leave Michał and Daniel already had the idea to explore a community built around Substrate Blockchain. So I started to play with Substrate and got to know this world, especially the Web3 Foundation activity. Then we decided to apply for a Web3 Foundation grant to develop a project for Web3.

We talked with the Substrate community, represented by Parity, and they told us about their need to build a more intuitive Treasury module for their nets: Polkadot and Kusama. Practically everyone can apply for funds to build projects for Web3 but non-tech-savvy people resign because they struggle with blockchain terminologies and tools. So we applied for a grant to create a solution that would help them. We launched BrightTreasury in 2021. Now we still develop it with the support from Polkadot and Kusama.

Find more info on how to enter the Web3 world with the BrightTreasury app.

You already gave us a sneak peek that bouldering is your passion, isn’t it? 😉 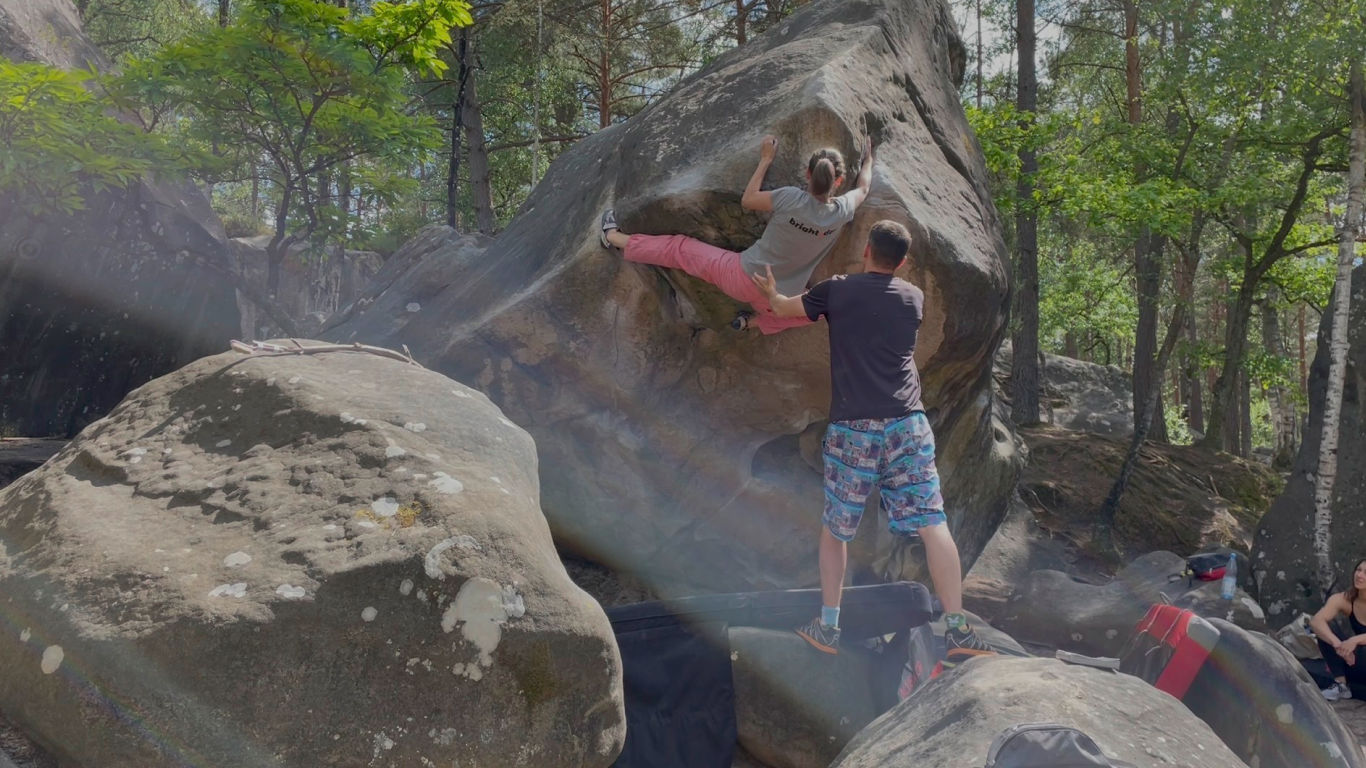 Yes, I actually have been climbing longer than working as a programmer. That has been a passion of mine and my husband, Paweł. I work out 3 times a week. Every family vacation includes bouldering. Our older daughter (age 6) has just started her first climbing. 🙂 My dream is to try Deep Water Solo in Majorca and experience climbing in the USA.

We are looking for a Fullstack Developer who has already had experience with TypeScript and Node.js. Apply and work with one of our clients from Israel, Germany, or the UK.
Previous